Major Eras of Exploration in Utah

An illustration on the map produced by the Dominguez-Escalante expedition of 1776.

Spaniards were the first Euro-Americans to set foot in the place we now call Utah.

Spain “owned” much of western America in the 1700s. In 1765 the governor of Santa Fe sent a group of men to explore the lands north of Santa Fe, learn about the people in the area, make a map, and search for silver.

Juan Maria Antonia Rivera led two expeditions to see what he could find. On the second journey, and he entered Utah around the Monticello area. He and his party became the first Euro Americans we know of to see the Colorado River.

Eleven years later, Dominguez and Escalante led their famous expedition looking for a trading route from New Mexico to the Pacific Coast. 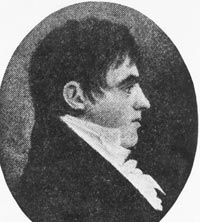 Fur trappers and traders followed these first expeditions. As they made their living by traveling across the land, they explored the region. They explored routes, lakes and rivers, mountain ranges, desert lands, and—most importantly for Utah’s later history—the mountain passes through which pioneers and other travelers would travel.

Probably nobody else explored as widely or as adventurously as Jedediah Smith. He made several significant journeys through Utah. And his rediscovery of South Pass in Wyoming allowed thousands of immigrants to travel west by wagon.

Trapper Jim Bridger reported his sighting of the Great Salt Lake in 1824.

Miles Goodyear established Fort Buenaventura on the Ogden River in 1844-1845.

These men were looking for beaver. How did they catch beaver, anyway? Find out.

For a while, these trappers and traders were the only non-native people using the land. Then, starting in the 1840s, groups of travelers occasionally crossed Utah, like the Bartleson-Bidwell party and the Donner Party.

In the winter of 1849-50, Brigham Young sent a group of 50 men led by Parley P. Pratt to explore southern Utah and identify possible places for settlements. During their cold and arduous journey, the group identified good places at the present sites of Richfield, Marysvale, Parowan, Cedar City, Washington, Santa Clara, Mountain Meadow, Beaver, and Payson. They brought back samples of iron ore, coal, and other minerals. They also collected information on weather, soil conditions, water, forests, and other topographical conditions. 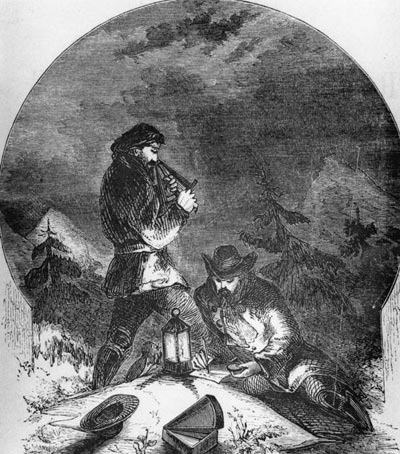 John Charles Fremont (1813-1890) was an explorer and surveyor of the West. here Fremont and the expedition artist, Solomon Nunes Carvalho, are taking astronomical observations.

Government explorers and surveyors also began to investigate the land more thoroughly. During the next few decades, lots of government parties explored, studied, wrote about, mapped, and found routes through Utah.

John C. Fremont was one of the first and most well-known. He mapped trails and described the land, plants and animals.

Fremont’s reports on the West came into the hands of leaders of the Church of Jesus Christ of Latter-day Saints (Mormons). These leaders studied the reports of the Great Basin with great interest. And in fact, those reports played a role in convincing the Mormon pioneers to settle in Utah.

In the last half of the 1800s, many more scientists and government explorers came west. They surveyed; looked for railroad routes; made maps; and described geology, water, peoples, plants, animals, minerals, and timber. A few of these include Howard Stansbury, John Gunnison, Clarence King, and John Wesley Powell.